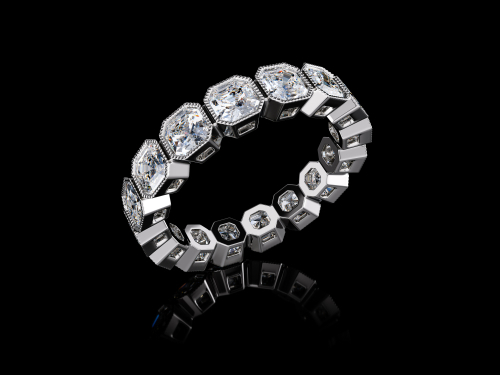 Most diamond buyers get confused when it comes to considering fluorescence as one of the factors to assess the quality of a diamond. While some people say that it is one of the major characteristics of high-quality stones, other people have said that fluorescence is the reason for the better appearance of low-quality diamonds.

What is the Fluorescence of a Diamond?

Most simply, fluorescence occurs when the ultraviolet rays get exposed to trace minerals that are contained in diamond stones. This effect is similar to white teeth getting and their glow when exposed to ultraviolet rays. Most often, this phenomenon can also be observed during the daytime when the sunlight has UV rays. Generally, it is a term that is been used to describe the light emitted by the diamonds while flashing IUV light on them.

When and How do the Diamond Stones Glow?

The stones that glow when they are exposed to ultraviolet rays are the ones that contain traces of minerals. These stones are also seen to be glowing to a greater extent during the daytime. GIA certification is given to stone after they are assessed in the laboratory along with the other tests that are done on the diamond. The fluorescence of a diamond stone could be faint, medium, strong or very strong and it is graded as per a scale.

Mostly one among three diamonds would show fluorescence, and that too in several degrees. Nevertheless, only teeth of those stones would fluoresce to levels that affect the overall appearance of the stone. This phenomenon is mostly affected by diamonds that have very strong, strong and medium fluorescence. Diamonds that are graded fainted would not fluoresce like the other ones that rank higher in the list.

It is important to keep in mind that different gemstones would have different levels of fluorescence and that the shades in them can have variations. They might have green, red or yellow shades. Also, the shades of blue are one of the colors that is most commonly seen in diamonds.

Factors on Deciding the Fluorescence

The next factor that should be checked is the strength of the fluorescence. Stones having high fluorescence would look hazy when looked under the wrong light, resulting in reducing the value of those stones.